We’re converting downtown streets from one-way to two-way. Here’s what you should know. 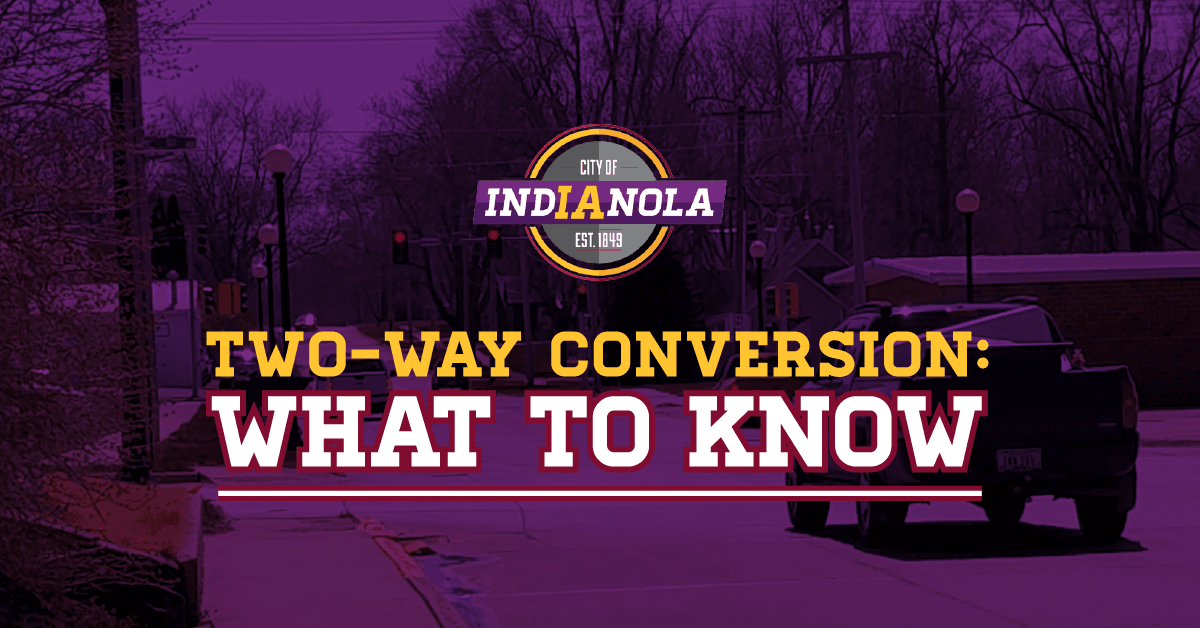 Hey, Indianola! After the last few years of reviews, discussions and approvals, the conversion of one-way streets to two-way is scheduled to take place in a few weeks.

On May 17th, traffic on Howard and Buxton Streets will switch from one-way to two-way, creating safer driving conditions and bringing many other benefits to our downtown area.

As part of ongoing effort to keep our community informed, we put together a post with key information about the project.

On Monday, May 17th, the current one-way traffic on Howard and Buxton Streets – as well as on all sides of Downtown Square – will change to two-way traffic. This conversion is part of the ongoing Downtown Square Streetscape project.

How does this benefit the community?

Here are ten reasons why we’re transitioning from one-way to two-way traffic.*

#4: Better exposure for businesses and easier navigation for visitors.

#5: Safer conditions for bikers and pedestrians.

*Note: The above benefits were derived from research from multiple sources. Data was provided by the Transportation Research Board; the Journal of Planning Education and Research; the Journal of Public Health; the Bloomberg CityLab; and multiple case studies from Fort Collins (CO), Austin (TX), Toledo (OH), Fargo (ND), Cincinnati (OH), Louisville (KY) and Des Moines.

How will this impact parking?

However, with the traffic conversion, the direction your car faces while parked will change. You will need to park your car facing south on Howard Street and north on Buxton Street.

Also, to accompany a new drive-thru lane for mail drop-off, parking on both sides of Buxton Street between 1st Avenue and Highway 92 will no longer be allowed.

How will this affect mail drop-off?

This project (along with a portion of the Streetscape project) is anticipated to be finished this summer. However, there may be a period during which you are unable to drive-up to drop off your mail while construction is occurring.

Are there new bike lanes?

As part of the conversion, the City will be adding on-street bicycle lanes between the Jerry Kelly Trail, which crosses Buxton Street at Franklin Avenue at the southeast corner of Buxton Park, and Highway 92.

These on-street shared bike lanes, as identified in the Indianola Trails Plan, will connect the Downtown Square and the Central Iowa trail network.

Will this impact intersections and traffic lights?

As part of this project, the City applied for, and received, a Traffic Engineering Assistance Program (TEAP) grant from the Iowa Department of Transportation. This enabled the City to study the existing traffic signal at the intersection of Highway 92 and Buxton Street.

This stoplight, which is operating under outdated components and in need of an upgrade (regardless of a traffic conversion), was studied to determine if it will still be warranted after the traffic conversion. The study revealed the stoplight is still necessary based on traffic volumes, accident history, geometry, sight distance, speed, and road capacity.

The intersection at Buxton Street and Clinton Avenue will also be converted from a three-way stop to a four-way stop.

Additionally, three other intersections will be converted from two-way stops to four-way stops. Those include:

Where can I learn more?

The City of Indianola’s City Square Master Plan, approved in 2019, outlines a vision to create a better downtown experience for businesses, residents and visitors alike. This plan includes two-way traffic conversions, as well as new parking structures, street furnishings and much more. 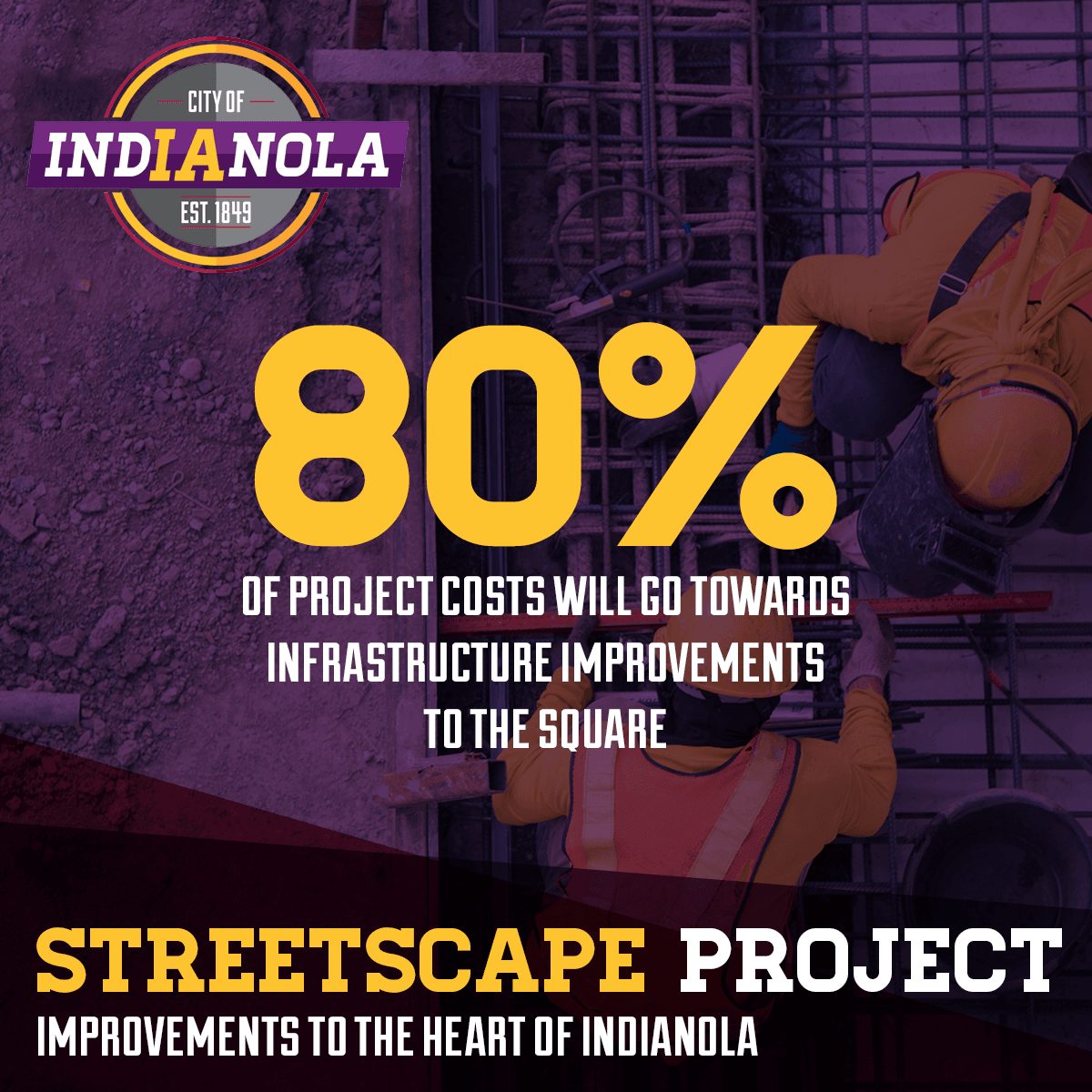 Beginning this year, the Downtown Square Streetscape Project will bring a number of improvements to the heart of Indianola. These improvements, which mainly consist of critical infrastructure updates, will support our residents and businesses for years to come, while attracting new visitors to Indianola.

Infrastructure improvements—including work being done on streets, sidewalks and underground utilities—account for more than 80 percent of the entire project. Remaining costs are for various street-level enhancements, such as new streetlights, trees, permanent planter boxes, and power for public events on the Square.

Sidewalks will be widened, offering businesses more outdoor space. Crosswalks will be improved, making it safer for pedestrians to cross. Also, two public parking lots will be rehabbed, making it easier than ever to visit the Square.

That’s a quick overview. Now, let’s take a closer look at one of the project’s most important components: updates and improvements to an aging utility infrastructure.

In addition to street and sidewalk improvements, the Streetscape Project includes much-needed updates to the Square’s utility infrastructure, which is outdated, undersized, and failing in many locations.

Get all the facts

The City’s investment in Streetscape was made in accordance with an assessment conducted by the Iowa Economic Development Authority (IEDA), along with the City of Indianola, the Indianola Chamber of Commerce, and the Warren County Economic Development Corporation, with significant input from the community.

To learn more about the Indianola Downtown Square Streetscape Project—including the Streetscape Assessment and Master Plan—click or tap here. 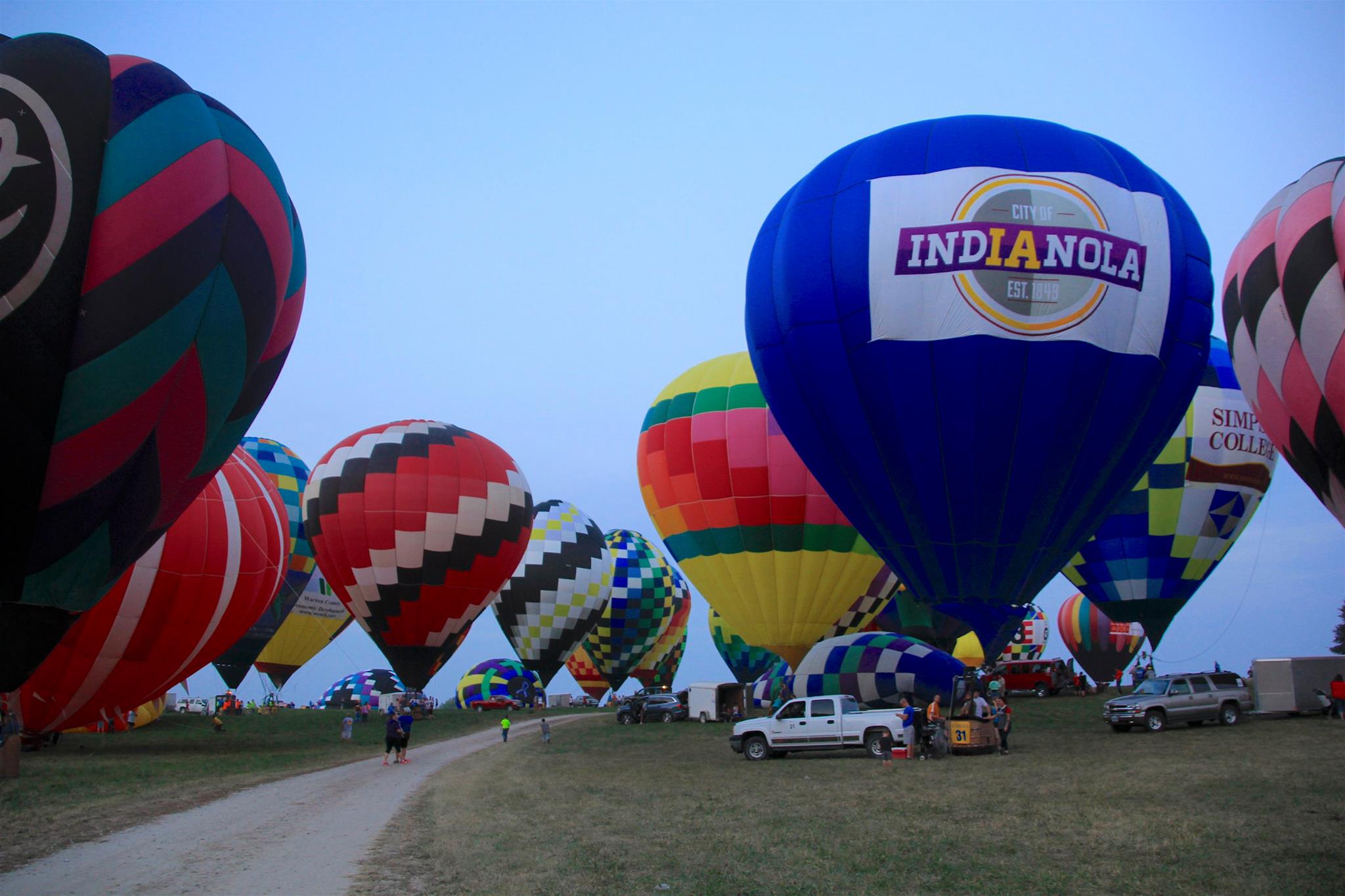 UFOs spotted over Indianola? Well, not quite...

When the stars come out over Indianola, the Nite Glow begins. Strange shapes take flight. Optical illusions abound. Egg-like giants, flashes of fire, things you just can’t explain—a flying mustache, for instance—parade across the starry night. And then, just when it can’t get any stranger, it all begins to glow.

Science fiction? Even better. It’s the National Balloon Classic, one of 2 big events coming to Indianola before the end of the summer.

Here’s everything you need to know about the Classic and the Warren County Fair...

Where: Most of the action is happening at the Memorial Balloon Field, 15335 Jewel St., Indianola.

Learn more: Book tickets for private rides, download the 2021 Guest Guide, and get all the details for the event here. 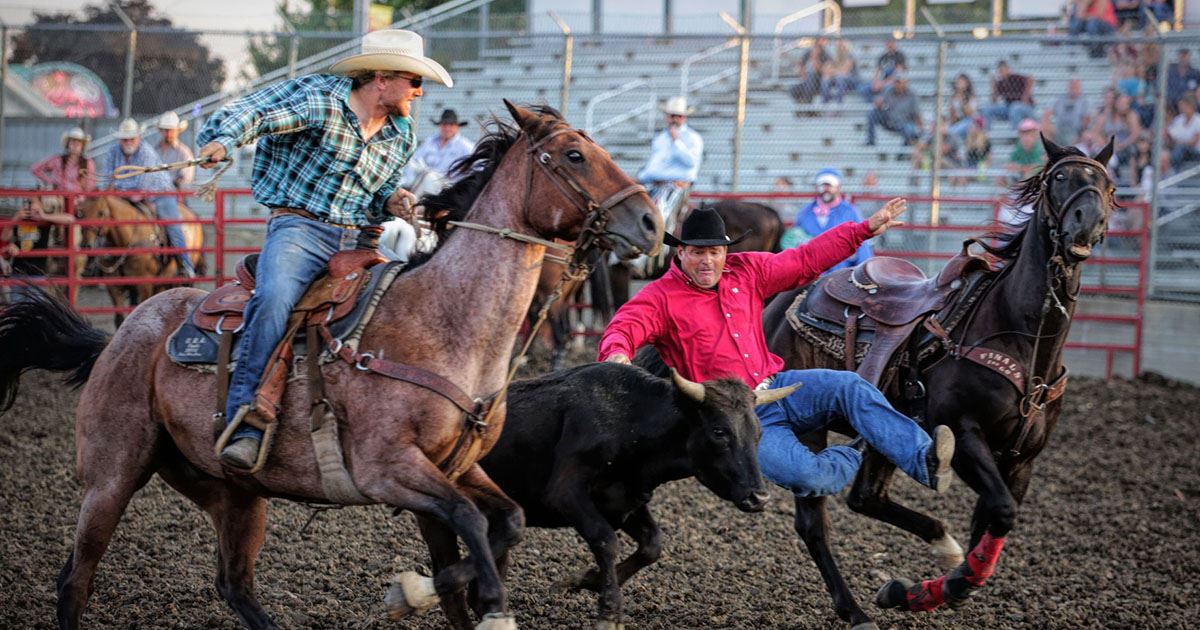 What: To say that the Warren County Fair is an ‘old tradition’ is an understatement. In fact, when the fair was first held in Indianola in 1855, there were only 31 states in the nation! One-hundred and sixty-six years (and 19 states) later, the annual event draws thousands to Indianola’s fairgrounds with delicious fair food, carnival rides, music and grandstand events.

This year, the carnival is making its glorious return (after a COVID-19 hiatus), along with a monster truck rally, a veterans’ ceremony, a wide variety of serious and less-serious competitions (Rooster Crowing Contest, anyone?), and an assortment of pig races, tractor pulls, magic shows, and, well, the list goes on and on.

Where: The Warren County Fairgrounds, of course! The main entrance is located at 1400 West 2nd Ave. (Highway 92) in Indianola.

Learn more: Buy tickets, check out the fair schedule, see the grandstand lineup, and get all the event details here. 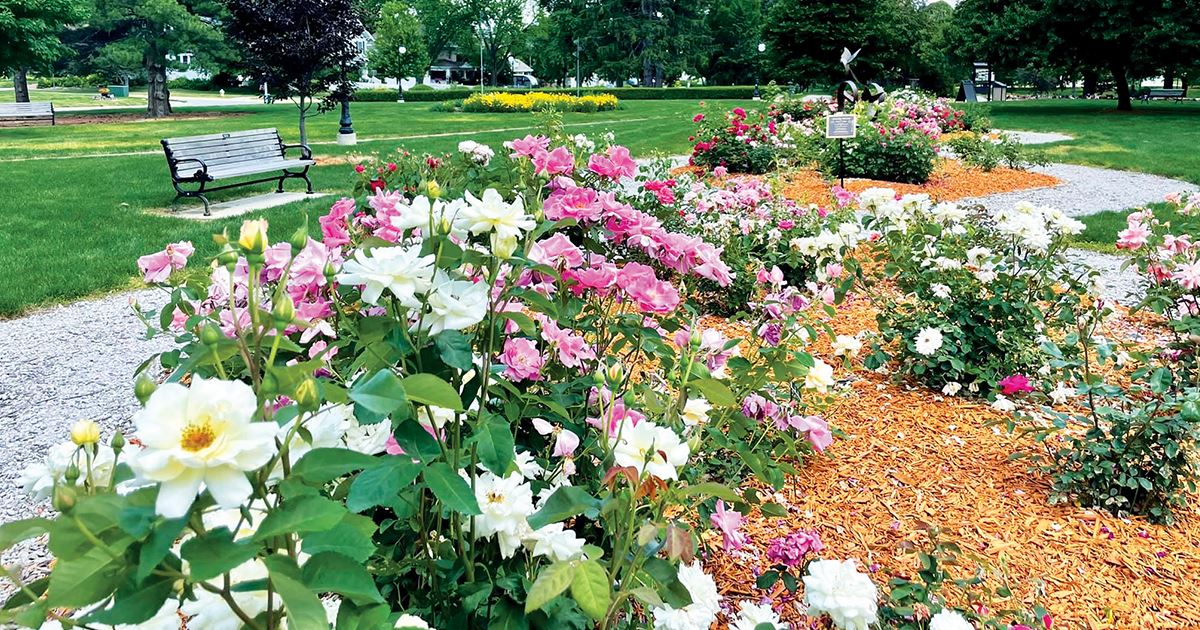 Here in Indianola, we love amenities that spark our imaginations, inspire our residents, and bring visitors to our community. That’s why we’re always growing and maintaining a variety of destinations and cultural attractions: from free yoga at our beautiful parks and activities for all ages at the Aquatic Center to the Des Moines Metro Opera, the National Balloon Classic, and the Warren County Fair.

The Metro Opera just wrapped up a thrilling 2021 summer festival—which the Chicago Tribune describes as “among the oldest and most enterprising... in the nation.” You’ll have to wait until next season to catch a show, but, in the meantime, you can donate to the organization and learn more here.